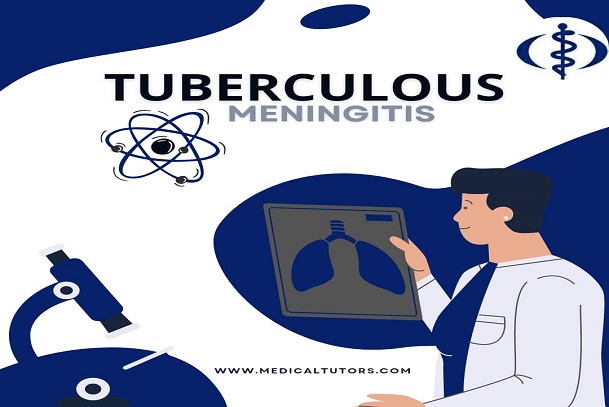 Summary
Tuberculous Meningitis (TBM) is the inflammation of the membranes (meninges) around the brain or spinal cord caused by the bacterium Mycobacterium tuberculous.

Tuberculous Meningitis (TBM) is a form of bacterial meningitis that causes inflammation of the membranes (meninges) around the brain or spinal cord. It is caused by the bacterium Mycobacterium tuberculous (this is the bacterium that causes tuberculosis (TB). This bacterial infection can begin anywhere in the body usually in the lungs, but in about 2% of TBM, the bacteria travel through the bloodstream to the meninges.

Unlike other types of meningitis that develop quickly, e.g., meningococcal or pneumococcal, TB meningitis usually develops slowly with vague symptoms such as aches and pains, loss of appetite, tiredness, and a persistent headache.

These vague symptoms can last for several weeks before the more specific symptoms of meningitis such as severe headache, dislike of bright lights, and neck stiffness occurs. Treatment with antibiotics and other drugs is usually effective against the infection, but the slow progression of the disease makes it difficult to diagnose and it is often advanced before treatment begins.

Who are at Risk of Getting TBM?

Not everyone who has Tuberculous gets TBM, but TBM can affect anyone irrespective of age, but it is more likely to affect people with these risk factors:

What are the Symptoms of TBM?

Tuberculous meningitis can develop when the TB bacteria enters the body by droplets inhaled from the cough/sneeze of an infected person. Then it multiplies within the lungs, passing through the bloodstream or lymph nodes (traveling to other parts of the body). Once the bacteria travel to the meninges, small abscesses are formed, and once these abscesses burst, it causes TB meningitis.

This can happen immediately, or several months or years after the initial infection. The infectious process causes a rise in pressure within the skull, resulting in nerve and brain tissue damage which is often severe.

In the early stages of the disease, the symptoms are often non-specific and include:

These symptoms can be present for several weeks whilst the disease keeps developing. Then later, more specific symptoms include:

How Is TBM Treated?

Due to the slow progression and non-specific early symptoms of TBM, diagnosis can be difficult. However, early diagnosis and treatment can significantly improve the outcome of TBM. If treatment is started early, most people will make a good recovery provided that the treatment course is duly completed.

To diagnose TBM, a cerebrospinal fluid (CSF) analysis is conducted. This test involves the insertion of a needle between the lower spine vertebrae, with samples taken to a laboratory for analysis. This analysis helps to determine if a person has TBM or not, but in cases where the CSF analysis is not possible, and there is a high suspicion of TBM, then treatment can proceed.

The treatment for TBM is similar to other forms of bacterial meningitis. It requires admission to a health center for close monitoring and assessment of the disease progression. Also, an antibiotic combination is given to treat the infection. These antibiotics include:

Treatment for TBM may vary according to the response of each patient. Medical doctors can also prescribe corticosteroid medications such as prednisolone or cortisone to reduce inflammation and swelling of the meninges. This is often recommended for the first few weeks of treatment.

How Can TBM Be Prevented?

Yes, TBM can be prevented through a vaccine known as Bacillus Calmette–Guérin (BCG) vaccine. This vaccine is very effective in young children and babies, giving protection against the more severe forms of TB, such as the TBM.

Due to the slow progression and non-specific early symptoms of TB meningitis, diagnosis can be difficult. However, research has shown that early diagnosis and treatment can significantly improve the outcome of the disease.

If treatment is started early, most people will make a good recovery however some will suffer long-term after-effects.

Where TB meningitis is diagnosed at a late stage, between 25 to 50% will be left with long-term after-effects. These are often severe and may include:

After-effects are often complicated and can require ongoing support (for life) from a wide range of health professionals and organizations.

Other people may experience one or more of a wide range of less noticeable, but still significant, after-effects. These can be temporary or permanent and include memory loss, anxiety, depression, headaches, learning and behavioural difficulties.