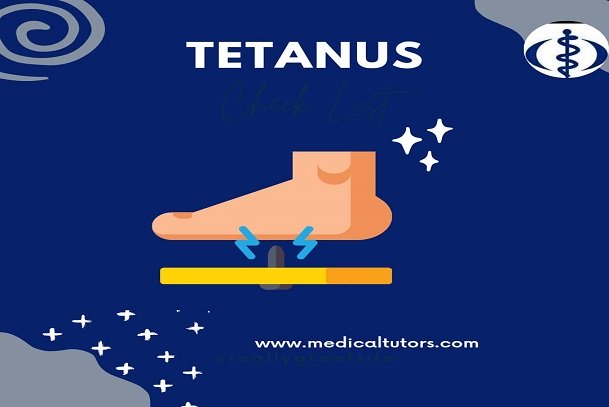 Summary
Tetanus is a bacterial infection that is caused by the bacterium Clostridium tetani.

It is caused by nerve toxins produced by the bacterium Clostridium tetani living in soil, saliva, dust, manure, animal, and human intestines. The bacterium can also lay dormant in its spore form for several years before becoming active, then developing into a regularly reproducing bacterium.

The bacteria enter the body through deep cuts, wounds, or burns then affect the nervous system. This infection leads to painful muscle contractions, particularly in the jaw and neck muscles.

Anybody can get tetanus but the disease is particularly common and serious in newborn babies and their mothers especially if the mother is unprotected from tetanus by the vaccine.

Causes and Mode of Transmission of Tetanus

Tetanus is caused by the bacterium called clostridium tetani, especially in spores form. The spore of the bacteria can be found in contaminated soil, dust, dirt, and animal faeces, but may exist virtually anywhere. Spores are small reproductive bodies produced by certain organisms, but quite resistant to harsh environmental weather such as high heat.

A healthy person can become infected with tetanus when these spores enter the bloodstream through a cut or deep wound. And once it enters the body, it multiplies rapidly and releases a neurotoxin called tetanospasmin, thus causing tetanus symptoms.

This toxin interferes with the signals traveling from the brain to the nerves in the spinal cord, and then to the muscles, causing muscle spasms and stiffness.

What Ways Can Tetanus Get Into The Body?

The spores from tetanus can get into the human body through broken skin, especially injuries from contaminated objects. Tetanus bacteria are more likely to infect certain breaks in the skin. These include:

Tetanus can also infect the body through breaks in the skin caused by:

Tetanus occurs worldwide but is more frequently encountered in densely populated regions in hot, damp climates with soil rich in organic matter. It is more prevalent in developing countries. In recent years, tetanus has been fatal in approximately 11% of reported cases. Globally 38,000 people died from tetanus in 2017, with around half (49%) being less than five years old.

The vaccine against tetanus has allowed massive progress in controlling the disease, with an 89% reduction in tetanus cases and deaths since 1990.

Over the past three decades, there has been a significant fall in the number of deaths from tetanus globally. In 1990, 314,000 people died due to tetanus while in 2019 there were less than 35,000 deaths — that is an 87% reduction. The majority of tetanus cases in the past and today occur in children under the age of 5 years. However, in recent times the proportion of cases in children has also fallen, from 76% in 1990 to just below half (49%) in 2017.

In Nigeria, the disease is also quite common, especially in the Northern part of the country. Although there has been a low-incidence rate over the years, the country is still far from being tetanus free with an incidence rate of 3.6 per 100,000 as of 2019.

Presently, there is an effective vaccine against tetanus. The vaccine is referred to as the DTP vaccine and it contains ingredients that protect one not only from tetanus but also from diphtheria and pertussis. As the coverage of tetanus vaccination increases, the number of tetanus cases declines.

WHO recommends DTP vaccination of babies and subsequent follow-ups in childhood, teenage and adult years. In countries with good vaccination programs, tetanus has been largely eliminated. Vaccination of pregnant women is also recommended to prevent neonatal tetanus.

Global tetanus vaccine coverage increased rapidly from 38 percent to 77 percent between 1983 and 1990. Since then, it has further increased to 86 percent in 2015.