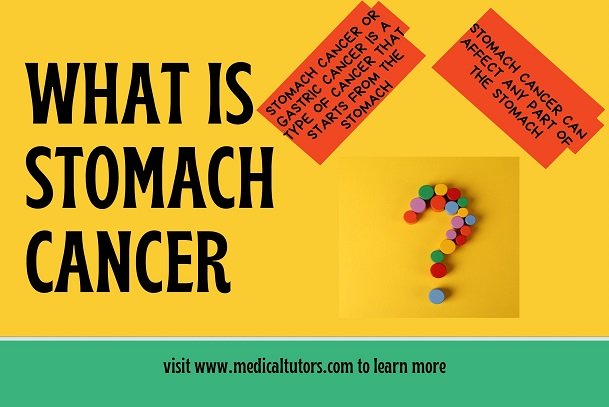 Summary
Stomach cancer or gastric cancer is a type of cancer that starts from the stomach. It is the growing of abnormal cells in the stomach.

Every cell in the human body contains healthy cells that grows normally and precisely, but when these healthy cells become infected or grows abnormally, then cancer begins to set in. And the moment any cell become cancerous, then the likelihood of such cells spreading to other part of the body is possible. Once, the healthy cells in the stomach starts growing abnormally, it’s termed as stomach cancer.

Stomach cancer or gastric cancer is a type of cancer that starts from the stomach. It is the abnormal growth of healthy cells in the inner lining of the stomach which could grow into a tumor overtime, thus spreading to other parts of the body. It can affect any person of any ages.

This cancer is currently one of the rarest forms of cancer in the world today; treatable if diagnosed early but diagnosing this type of cancer is very difficult due to the fact that its undetectability is very low because it does not show any form of symptoms especially at its early stages. This presumable makes it possible to spread unnoticed to other parts of the body especially nearby organs which are close to the stomach.

Stomach cancer affects any part of the stomach, but it’s more likely to affect the area where the esophagus meets with the stomach, so detecting stomach cancer early, medical scientists advise that individual learn about the early signs of stomach cancer; practice self-examination; speak to medical doctors whenever they notice any form of discomfort around their stomach.

Stomach cancer has been known to affect older people than the young ones. The average age of stomach cancer diagnosing is 68 years, with 6 out 10 diagnosed people between the ages of 65 years and older. This type of cancer is more prevalence among men (about 1 in 96) than woman (1 in 152).

The stomach is a muscular organ that is located on the left side of the upper part of the abdomen. It’s a sac-like organ which is very important among the digestive system. The moment food is swallowed, the esophagus carries the food through the throat and chest into the stomach through a muscular valve called the lower esophageal sphincter. The place where the esophagus joins the stomach is referred to as the gastroesophageal junction which is slightly below the diaphragm.

The stomach, containing the gastric acids then starts secreting the food by releasing acids (juice) and enzymes to help digestion; mixing the juice with the food and emptying it into the first part of the small intestine called the duodenum.

Parts of the Stomach

The stomach is made of five parts: cardia; fundus; corpus; antrum; and the pylorus.

Fundus: It is the upper part of the stomach that is next to the cardia, which forms a bulge above the opening of the esophagus.

Some cells in this part of the stomach make acid and pepsin, a digestive enzyme which combines with the gastric juice and helps in the digestion of food. They also make a protein called intrinsic factor, that helps absorb vitamin B12.

Antrum: This is the lower part of the stomach which is near the small intestine where the food gets mixed with the gastric juice.

There are several types of stomach cancer, which are primarily determined based on where the tumor originates. The stomach is made up of five different layers – the mucosa, submucosa, muscularis propria, subserosa and serosa – and each layer has a specific function in the stomach’s ability to digest food. For example, the mucosa is the innermost layer of the stomach where acid and digestive enzymes are made, the muscularis propria is made of muscles that contract to help the stomach mash up food and the serosa is the outermost layer that helps hold the organ together.

Once a person is diagnosed with stomach or gastric cancer, there is almost 90% probability that he/she has adenocarcinoma.

These are stomach cancer that starts from the immune system cells called lymphocytes which is located in the stomach. Although lymphomas usually begin from other parts of the body, but in regards to stomach cancer, they begin in the wall of the stomach.

Gastrointestinal stromal tumors (GISTs) are a type of stomach cancer (tumor) which can be noncancerous or cancerous. Quite uncommon, GISTs form from cells in the stomach wall called interstitial cells of Cajal. Some GISTs are more likely than others to grow into other areas or spread to other parts of the body. Although GISTs can start anywhere in the digestive tract, most start in the stomach.

This type of stomach tumor begins from cells in the stomach (digestive part of the stomach). It grows slowly and do not spread to other organs in the body; though some type of neuroendocrine tumors can grow and spread quickly.

A rare type of stomach tumors, slow-growing type of cancer that starts from the cells of the nervous and endocrine system.

This is a stomach cancer that occur in the skin-like cells that make up the stomach lining.

Small cell carcinoma is an extremely rare type of stomach cancer. A type of neuroendocrine tumor that often develops in conjunction with other type of tumors.

Stomach or gastric cancer; a stomach that affects the stomach is known to affect both genders, yet it is not one of the less diagnosed cancer. It used to be one of the leading cancers diagnosed in the world, but presently is the sixth most common cancer, and third most common cause of cancer-related deaths in the world. There is a wide geographical incidence among people in the far east (Japan and China); Latin America, specifically South American countries, and lowest in Africa.

Just like other form of cancer in Nigeria, stomach cancer is treatable with a higher survival rate if it is diagnosed early.