Diagnosis And Staging Of Stomach Cancer 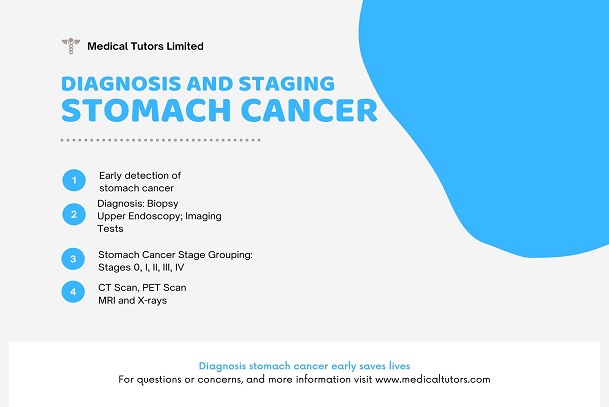 Being a rare type of cancer that do not have any form of symptoms until it’s in an advanced stage, that is why detecting stomach cancer is quite difficult. Although once cancer is detected early, there are high chance of surviving, but for stomach cancer, even if detected at later stages, it is still treatable.

Unlike Africa, North America especially USA, in some countries in East Asia and South America, where stomach cancer is much more common, mass screening of the population has helped find many stomach cancers at an early, possibly more curable stage. There is no mass screening in Nigeria. However, it’s not clear if this has led to a lower number of stomach cancer deaths.

The benefits of screening might outweigh the risks in some people who are at an increased risk for stomach cancer because of certain risk factors e.g., those who have certain potentially pre-cancerous stomach conditions or inherited conditions such as familial adenomatous polyposis.

One of the best ways of describing or knowing the right place where cancer is located; if or the places it might have spread to; or the probability of affecting other organs of the body is referred to STAGING. After a person is diagnosed with stomach cancer (gastric cancer), medical doctors use different examination tools with tests to help determine the stage of the cancer, that is why staging the stomach cancer will not be complete if all the tests and examination haven’t been carried out.

Stomach cancer starts from stage 0 which is also referred to as carcinoma in situ. Stomach cancer stage grouping starts from 1 (I) through 4 (IV), but there is a probability of having a re-current stomach cancer. And these stages are further divided into alphabets such as A, B, C etc., so as to show some extra details. The lower the number, the lesser the cancer has spread, and the higher the number, the farther the cancer has spread to other part of the body.

This stage is also referred to as the “carcinoma in situ”. At this stage, abnormal cells are found on the surface of the epithelium; inside the lining of the mucosa of the stomach wall. These cancerous cells have not spread to any other layer of the stomach, but can become cancer and spread to nearby lymph nodes.

At this stage, stomach cancer is present in the lining of the mucosa. Stage I is further divided into Stage IA and IB.

At this stage, stomach cancer has spread to one or few nearby lymph nodes but not lymph nodes of other parts of the body or distant organs.

At this stage, depending on places where the cancer might have spread, stomach cancer stage III is divided into IIIA, IIIB, and IIIC.

In stage IV, cancer has spread to other parts of the body, such as the lungs, liver, distant lymph nodes, and the tissue that lines the abdomen wall.

Recurring stomach cancer is a cancer that occurs after treatment has been completed. This recurrence can be localized meaning stomach cancer re-occur at the first place where it started. Also, recurrent stomach cancer can be a distant metastasis, meaning the cancer has started at another organ or part of the body.

Stomach cancer can be diagnosed using various form of tests, and these test help to determine where the cancer might have spread from one organ to another. These diagnostic tests also help to determine the type of treatment plan that suits the person’s overall health conditions.

When individuals develop persistent symptoms of stomach cancer, it is advisable to seek medical attention immediately. These symptoms, personal and family history, medical history and lifestyle choices help medical doctors during diagnosis. Also, they perform physical examination to check for tenderness or lump around the stomach.

Blood tests can also be used to identify if there are excessive substances which could indicate cancer, and also check the count of red and white blood cells, as well as platelets and hemoglobin.

Diagnostic tests for stomach cancer may include the following:

Upper endoscopy, also known as esophagogastroduodenoscopy or EGD is a test done whenever there is suspicion of stomach cancer. Here, the doctor uses an endoscope to look inside the stomach, examining the esophagus, stomach, and the duodenum so as to see any abnormality. Once an abnormality is seen, samples are collected using biopsy and sent for test in a laboratory.

During endoscopy, once any form of abnormal cells is diagnosed, then samples of these abnormal are removed and sent to a laboratory for analysis. The process of removal is referred to as biopsy. Sometimes, some stomach cancer may start within the deep part of the stomach wall, making biopsy a bit difficult to detect. And once this is suspected, endoscopic ultrasound is used to get a biopsy sample. Biopsies can also be taken from areas apart from the stomach if there is suspicion that stomach cancer might have spread to nearby lymph nodes.

Imaging tests are used to show a detailed of the stomach, using x-rays, radioactive or sound waves, magnetic fields to create pictures of the inside of the body. Imaging tests such as x-rays, CT scans, PET scans are usually used during imaging tests.

Imaging test may be done for certain reasons, and these includes:

Once stomach cancer has spread beyond the stomach, within the abdomen or chest, medical doctors may recommend surgery to detect cancer, especially if imaging tests have not shown it spread. This diagnostic method is known as laparoscope.

[Next Article: Treatment of Stomach Cancer]